On Dec 5th 2017 we got a reply from the Ministry of Construction and Physical Planning:

On 27.12.2017. statement from the Department for the Protection of the Cultural Heritage of the Conservation Department in Split, signed by the Head of State Dr. sc. Radoslav Bužančić:

Illegal construction and excavation at this site have a negative impact on the church and the potential archaeological site, so it is decided to carry out preventive protection on the surrounding parts while no monumental features are found in the mentioned coverage. This would stop further devastation and allow the future presentation of the remains of the Benedictine monastery if they were found. 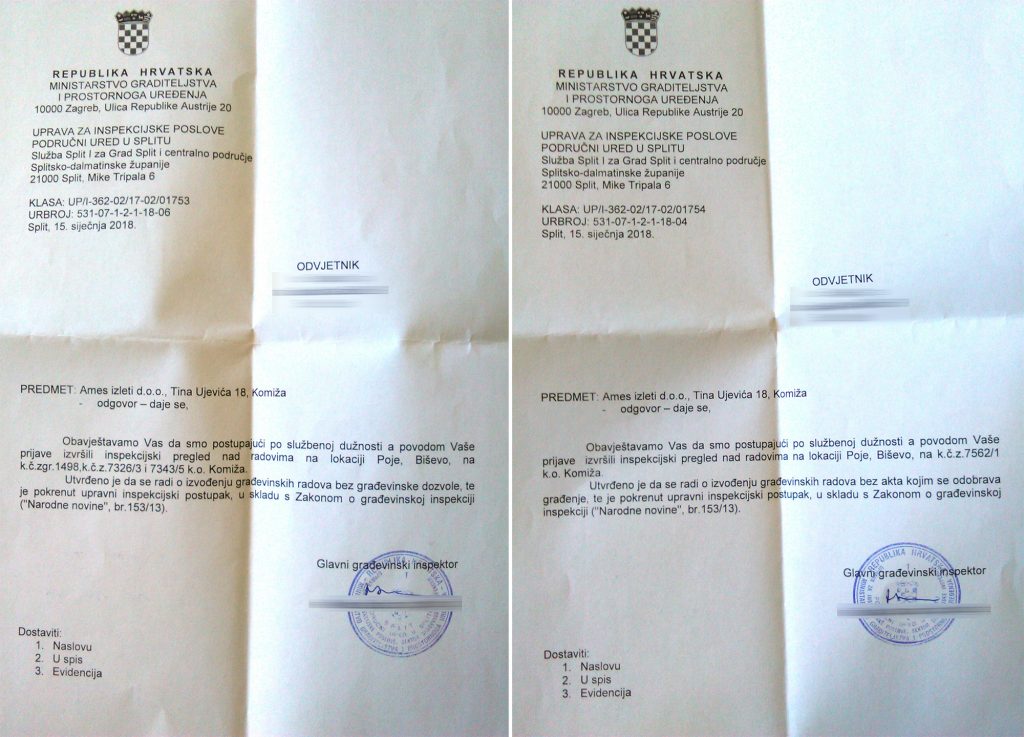 On January 5, 2018, the Assistant Minister of Culture, Directorate for the Protection of Cultural Heritage, Davor Trupković:

Taking into account the data from the historical sources and the complexity of the position, the Ministry of Culture, the Conservation Department of Split, as the competent body, will conduct a review of the cultural property solution in order to establish the scope of the archaeological site, the protection measures and the possibility of presenting the remains of the Benedictine monastery his remains . Research on a wider area, including a construction site in the immediate surroundings of the church of St. Silvestra, should establish the position of a monastery house and a small Benedictine cenobia, so that the conditions for presenting archeological remains outside the church could be obtained.

Considering the natural and cultural values ​​of the whole area of ​​the island Biševo, which together represent the exceptional ambience and authentic landscape of the Adriatic Adriatic Sea, we consider it necessary to preserve these values ​​to the fullest extent possible. However, the competences and conservation mechanisms go beyond the conservative approach and other protection mechanisms (Natura 2000 Ecological Network Area, Geopark Viški Archipelago) have to be activated, which will influence the quality planning and management of island values. 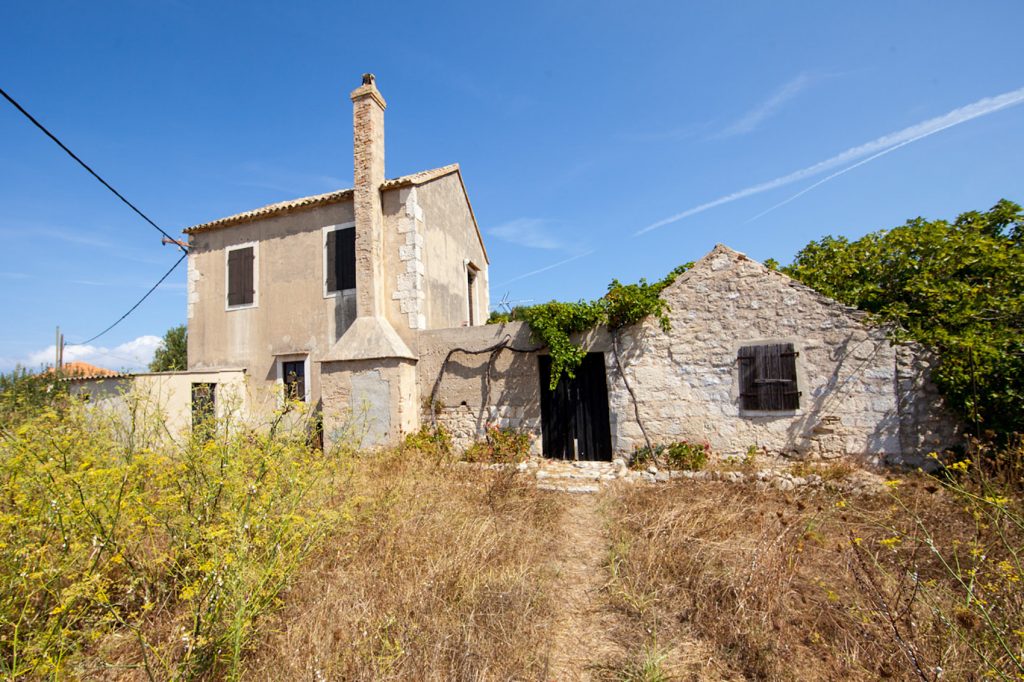 THE HOUSE OF THE INVESTOR PJERINA IVČEVIĆ (LEFT) AND THE NEIGHBORING HOUSE OF THE TORRE / TAFRA FAMILY (CCA 45M2 ), FOR WHICH IVČEVIĆ OFFERED 4000 EUROS. 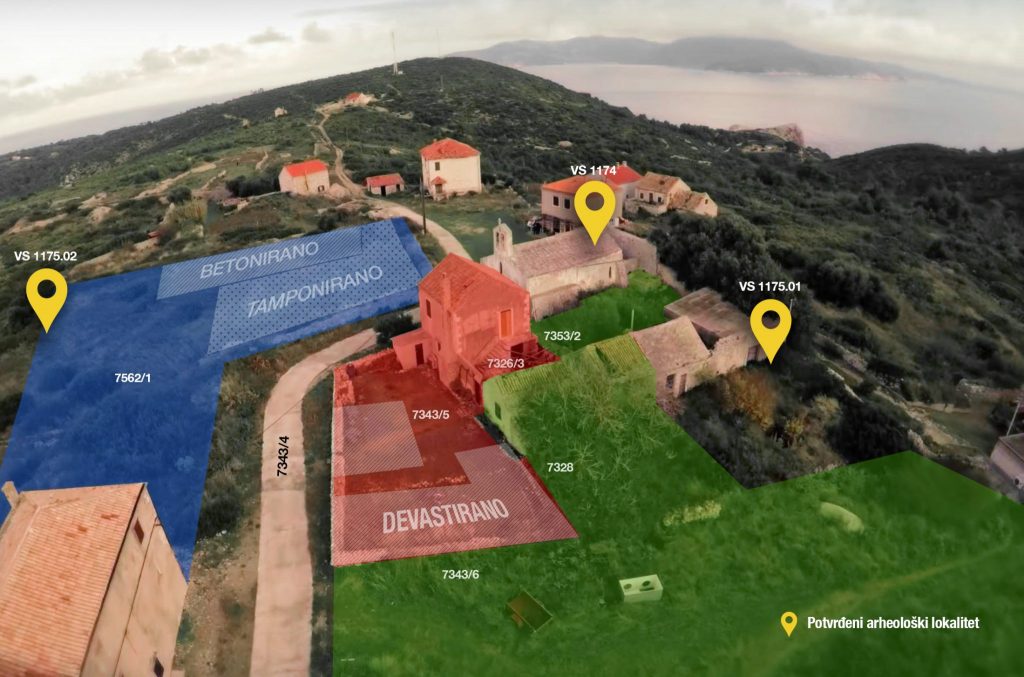 According to the mapping “Terms of Use, Decoration and Space Protection – Areas of Special Space Limitations”, the Plots are in a particularly valuable area – the natural landscape and the ecological network marked HR2001097, Biševo Land . There is a question about the size of the degradation of nature, the destruction of part of the landscape … 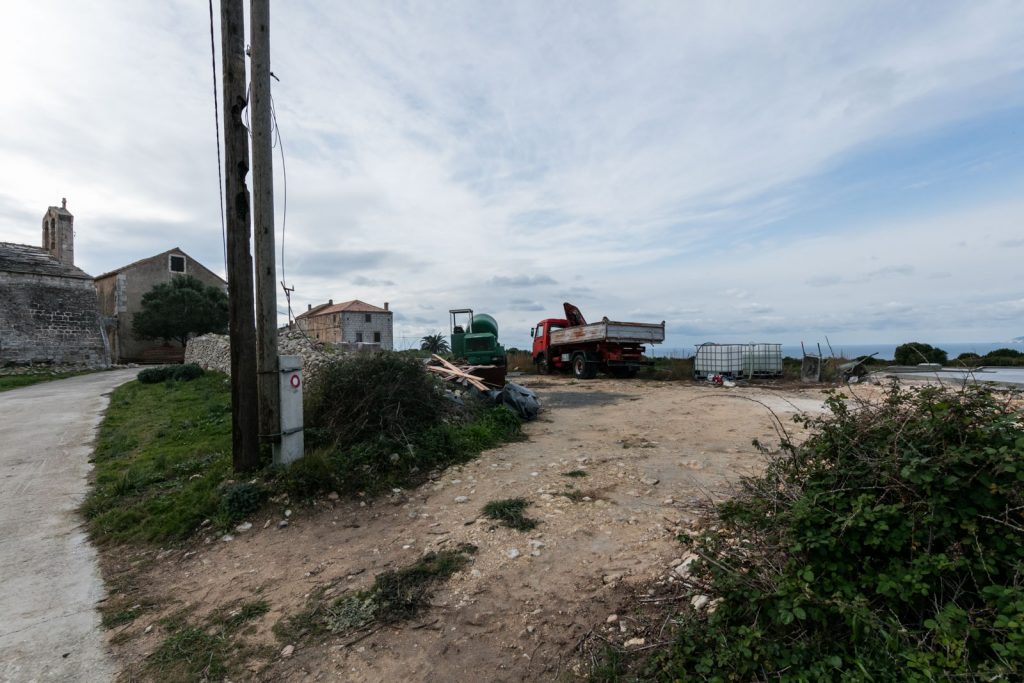 THE DEVASTATION OF A PART OF THE DRYWALL, TAMPONIZATION AND CONCRETEIZATION OF APPROXIMATELY 850M2 OF LAND UNDER THE PROTECTION OF NATURA 2000 (MEASURED AT HTTP://GEOPORTAL.DGU.HR ). IVČEVIĆ IS NOT THE OWNER OF THE PLOT 7562/1.

According to the cartography “Conditions for use, arrangement and protection of the area – areas of special conditions of use”, the particles are in the archaeological area . Additionally, there is a contact zone of the church of St. Silvestra is registered in the Register of Cultural Property of Croatia . In other words, the minimum required was the confirmation of the main project of the competent public authority.

Up to now, the unlawfully built part is separated from the existing building, which is in line with the provisions of the PPUG of Komiza , in particular the conditions of Article 31 relating to the construction conditions in the constructed contact area. It is not in line with the distance of the objects from the particle boundaries and the planar size, which means that no such building permit can be obtained for such a conceived assembly .

Part of the existing building has been removed, and some openings are built. Removal required clearance for removal, and the change of openings on traditional buildings is not allowed in principle.

The fact that the construction site does not have a protective fence is particularly dangerous and affects the safety of the site, and excavates a minimum of 3 meters deep and a part of the excavation is located directly on the road. Excavations and rough construction works in one part are located next to the neighboring built particle and there is also the possibility of material damage.

In addition, the pledge has been entered in the ownership list to secure the claim by the Croatian Bank for Reconstruction and Development (HBOR). Since it is customary to approve loans for legitimate construction, then HBOR’s credit is spent on illegal activities .

The competent authorities are required to act in accordance with the criminal provisions of the relevant laws. 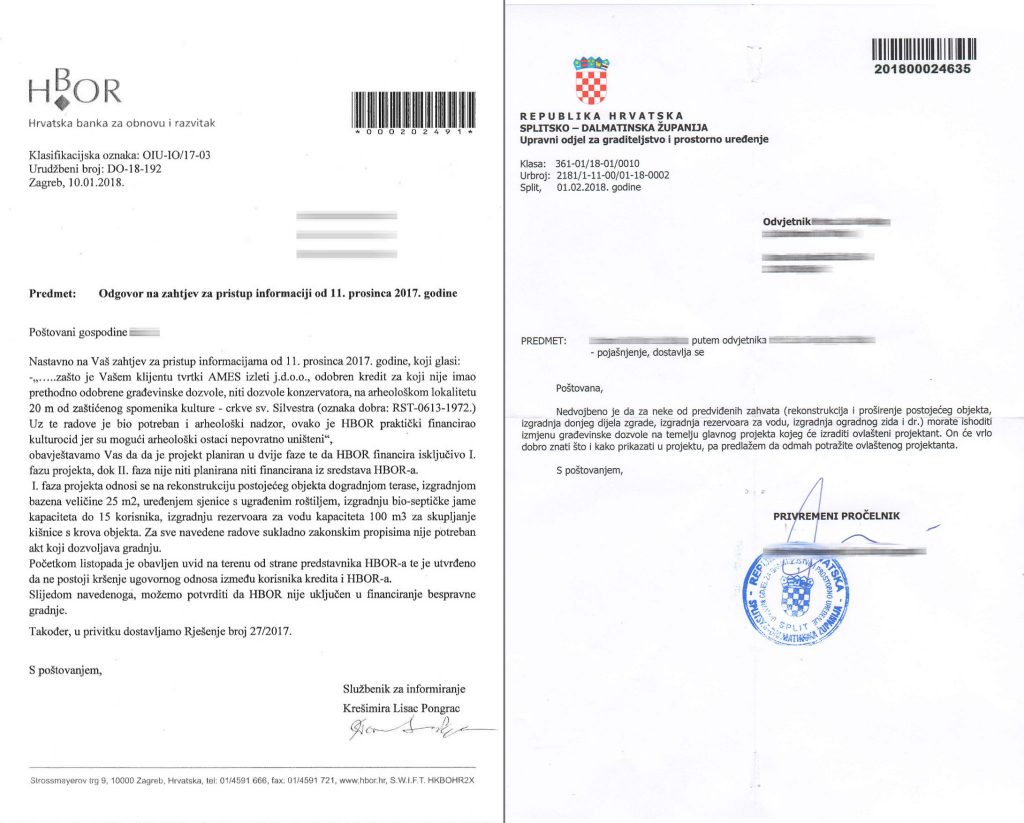 Without a building permit Mr. Pjerino Ivčević started construction of the building in the yard of the family house at the beginning of 2017, 1498, Plot 7326/3 and Plot 7343/5 in Komiža (owned by AMES EXCURSIONS jdoo .), And without the consent of the neighbors directly relied on the construction of only 14 cm from the neighbouring house on Plot 7328, 7326/1 and 7326/2, closing the small window on the north side. It seems he is trying to build a two-storey building with two other buildings directly on the cadastral plot boundary . 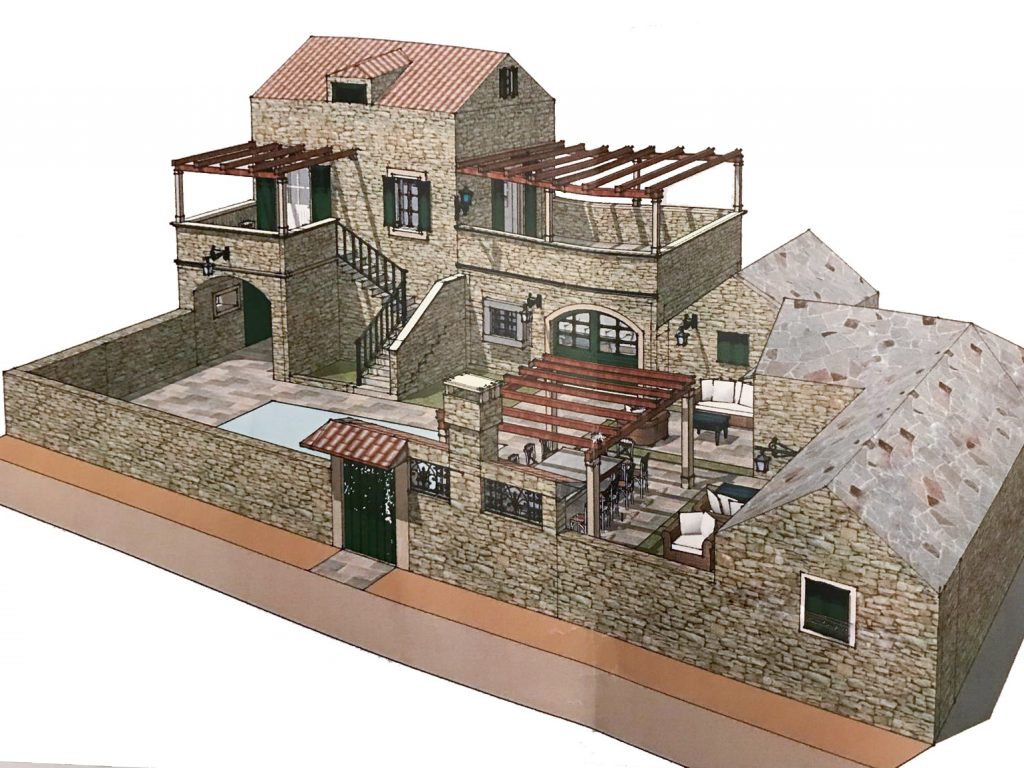 IVCEVIC’S PROJECT NEAR THE CHURCH OF ST. SILVESTER 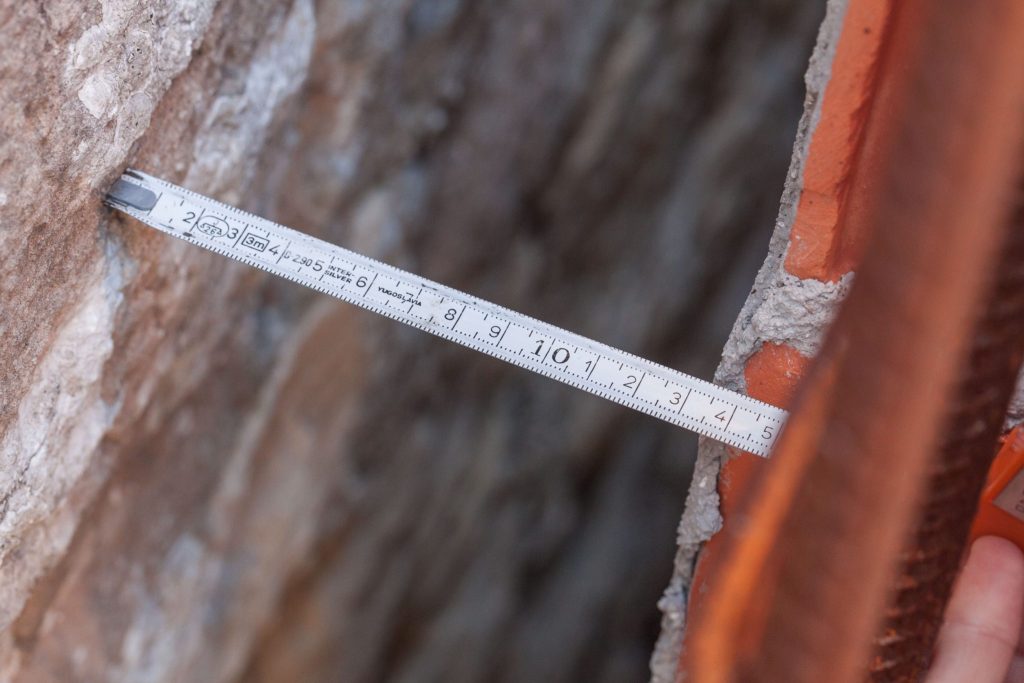 Pjerino Ivčević is the husband of the owner of the company AMES IZLETI jdoo, and the first cousin of the Mayor of Komiža, Tonka Ivčević. 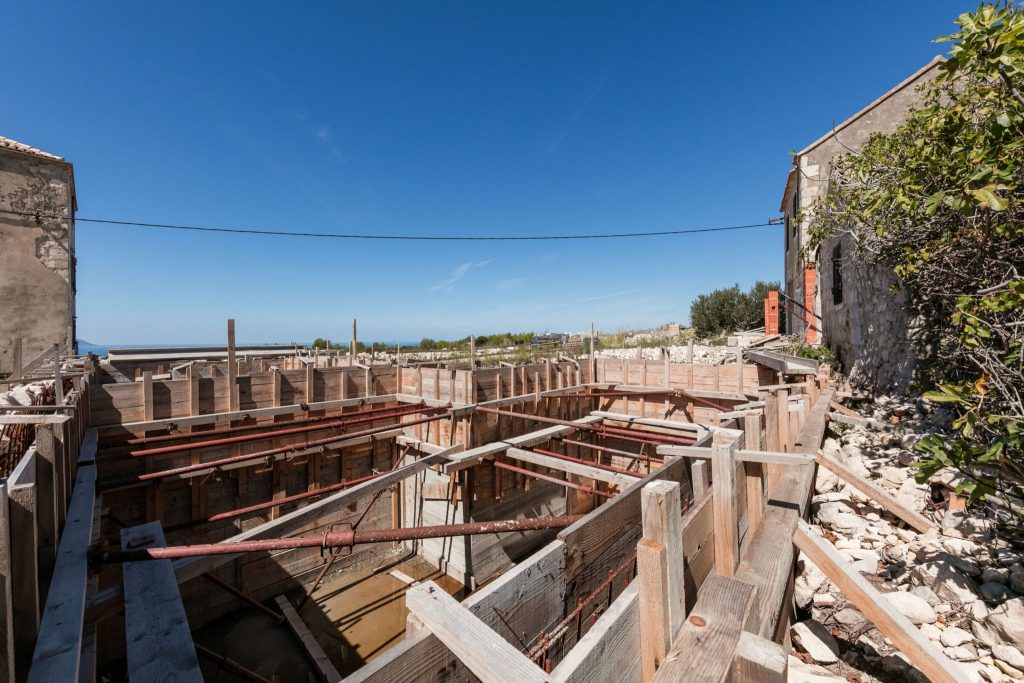 It should be noted that Ivčević, without the knowledge and consent of the owner, took possession of the mentioned particle, where he tamponized and cemented about 850 m2 . Due to these actions a separate judicial process has been initiated.

In a local newspapers interview, we found out: “The house was conceived as a place where guests would get top accommodation and content surrounded by untouched nature, eco-garden, artifacts and scaffolds. They were planning to bring in several donkeys who are no longer in that deserted islet . ” 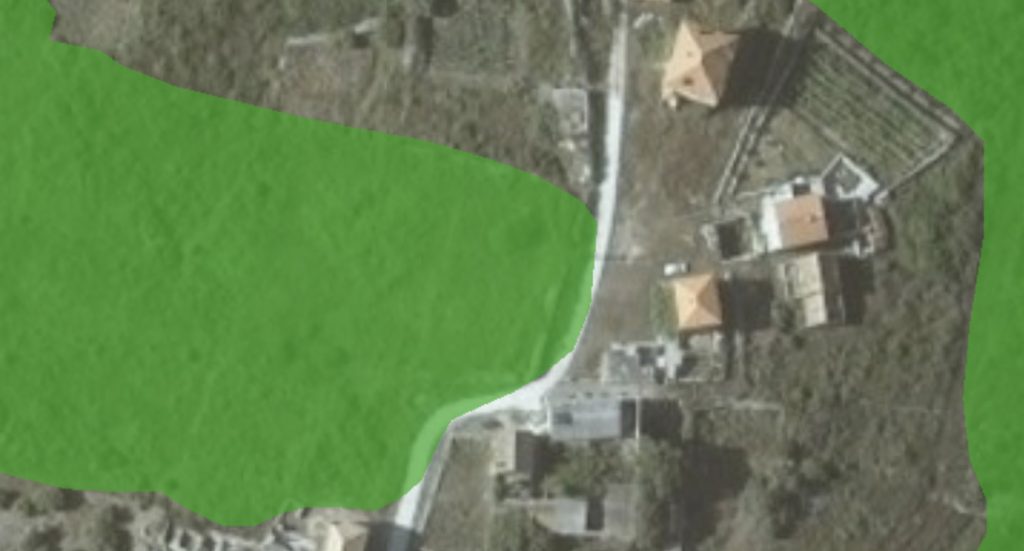 NATURA 2000, “LASTING GRASSLAND 2015”. ONE OF THE PRACTICES THAT ARE BENEFICIAL TO THE CLIMATE AND THE ENVIRONMENT IS THE BAN ON THE EXCHANGE OF ENVIRONMENTALLY SENSITIVE PERMANENT GRASSLAND AND PASTURE ON SPECIAL SITES WITHIN THE “NATURA 2000” AREA. SOURCE: ARKOD BROWSER

8. The statement by the town of Komiza

Mayor of Komiža Ms. Tonka Ivčević in an interview with Index.hr claims: ” The town of Komiža is not authorized for illegal construction and the object of her cousin is in the building zone. The suspicion of doing anything illegal. ”

From the faculty Mr. Ante Jurić got the answer:

In accordance with your correspondence regarding the illegal construction of the island of Biševo, we see the following:

The city of Komiža, as a unit of local self-government, is not competent to conduct supervision of a building facility with the aim of establishing illegal construction .

The eventual jurisdiction of the City of Komiza is stipulated by the provisions of the Civil Engineering Inspection Act (NN 153/13), which prescribes the procedures and powers of the municipal regulator in the implementation of supervision, while the competent body or construction inspectorate is responsible for determining the illegal construction.

As Komiža Town currently does not have an employee communal line, it is not able to carry out supervision in accordance with the provisions of the Law on Construction Inspection . 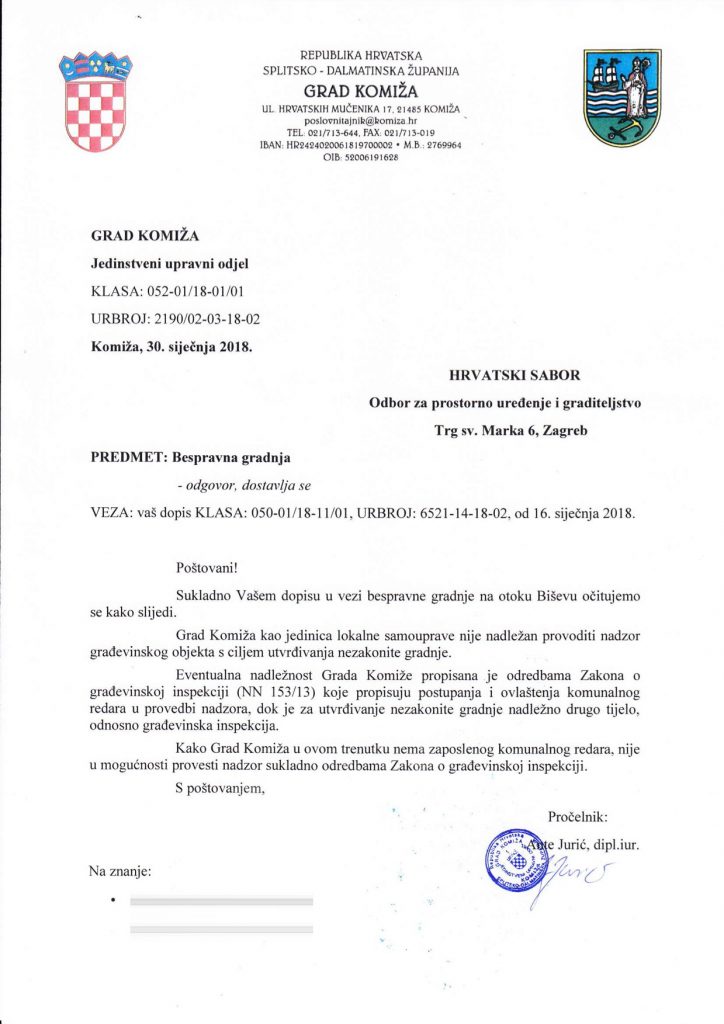 9. Clarification of the Ministry of Construction and Urban Planning

On February 26, 2018, we received a response from the Ministry of Construction:

” On the occasion of several applications received in September 2017 concerning construction on the island of Biševo, the competent construction inspector of the Regional Office in Split carried out construction supervision on cadastral plot no. 1498. 7343/5 and 7326/2 (building zone) and cp. 7562/1 (outside the building zone), Komiza in December 2017. It was found that the investor AMES EXCURSIONS jdoo performs construction works of reconstruction and construction without permission for construction, as well as for c. 7562/1, the coCiosis avoided the irregular shape plate max. dimensions 29,0x 7,0m .

In further proceedings, the construction inspection will monitor the state of construction at the site in question and proceed according to the Law on Construction Inspection (Official Gazette No. 153/13). ” 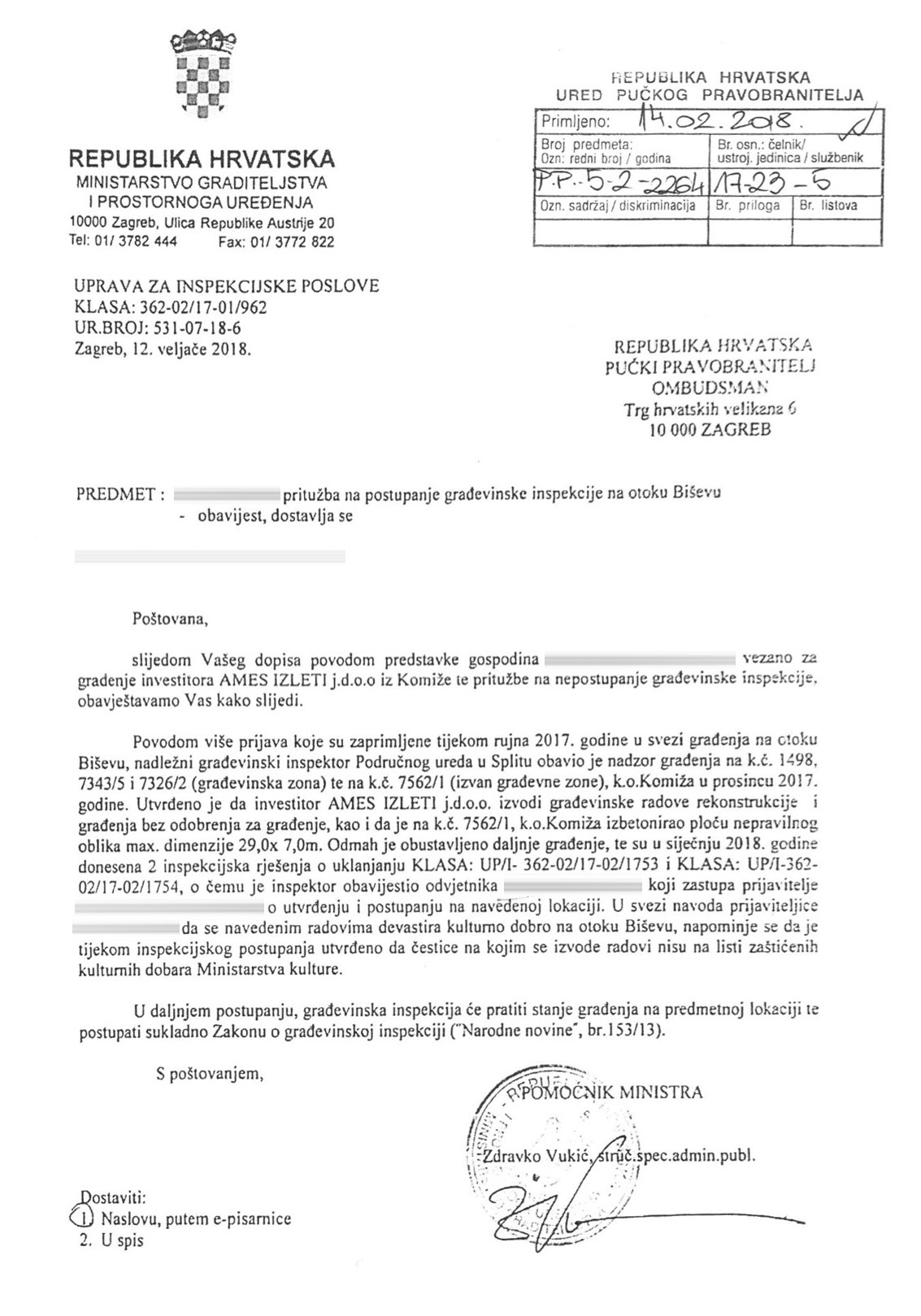 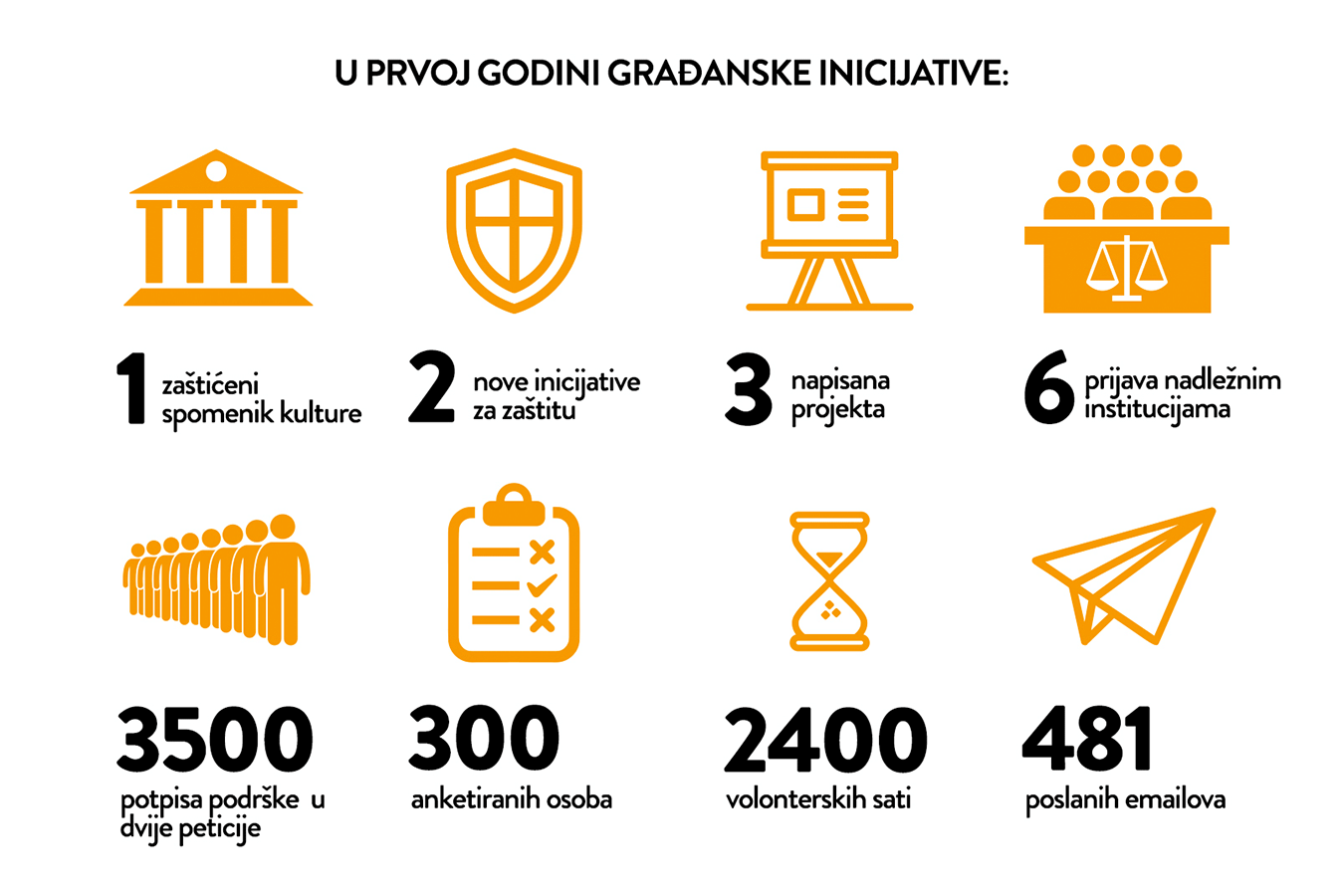 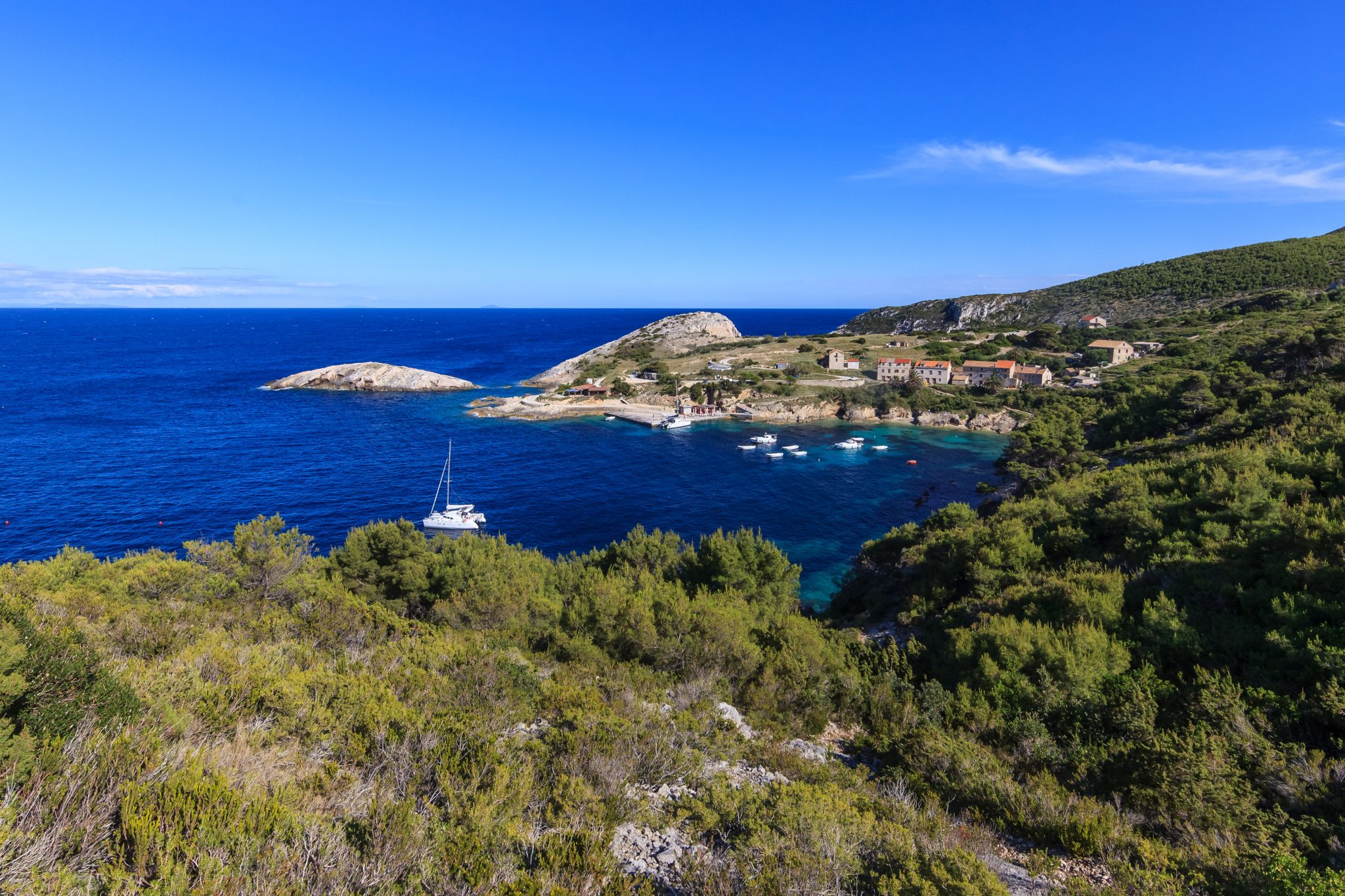 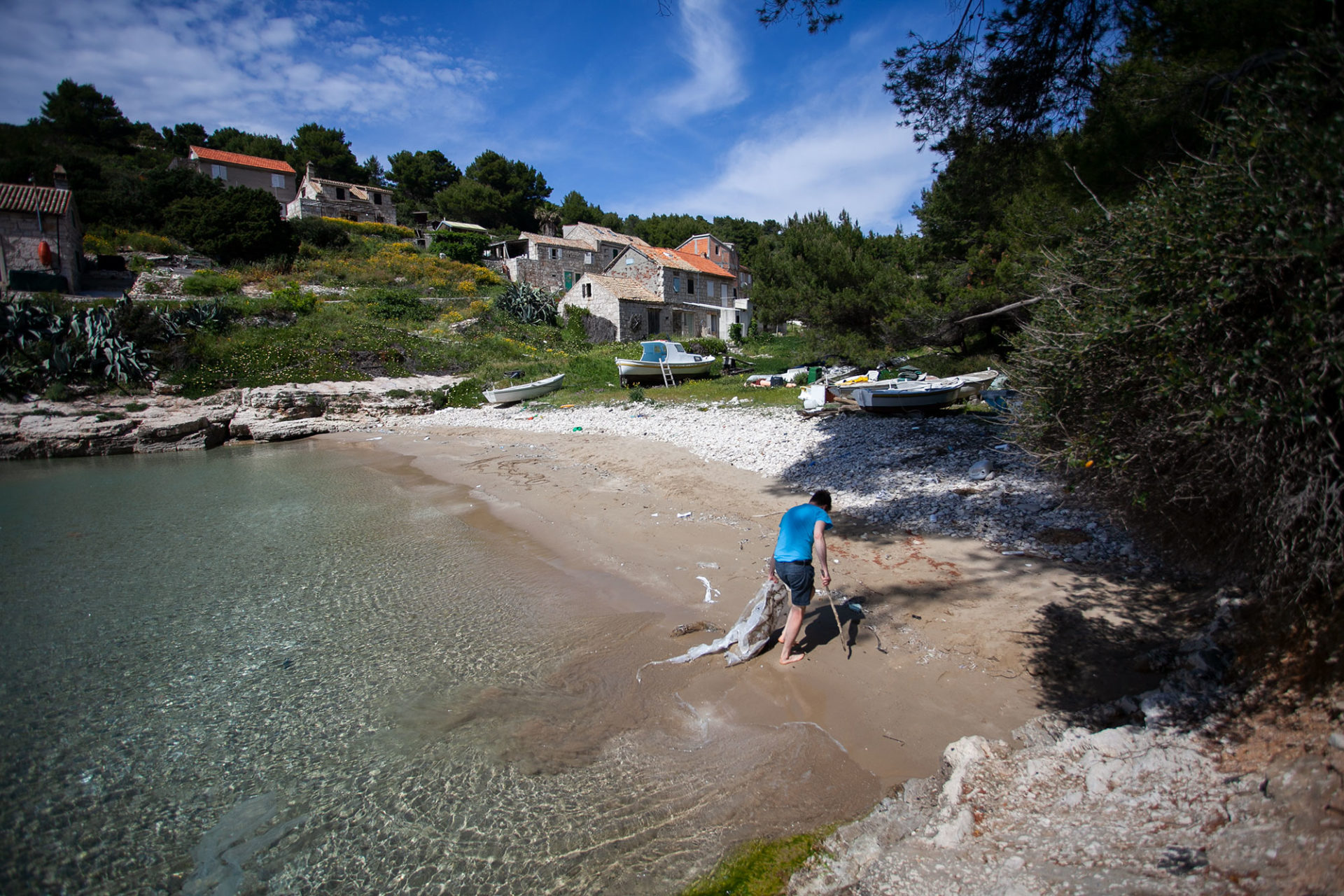 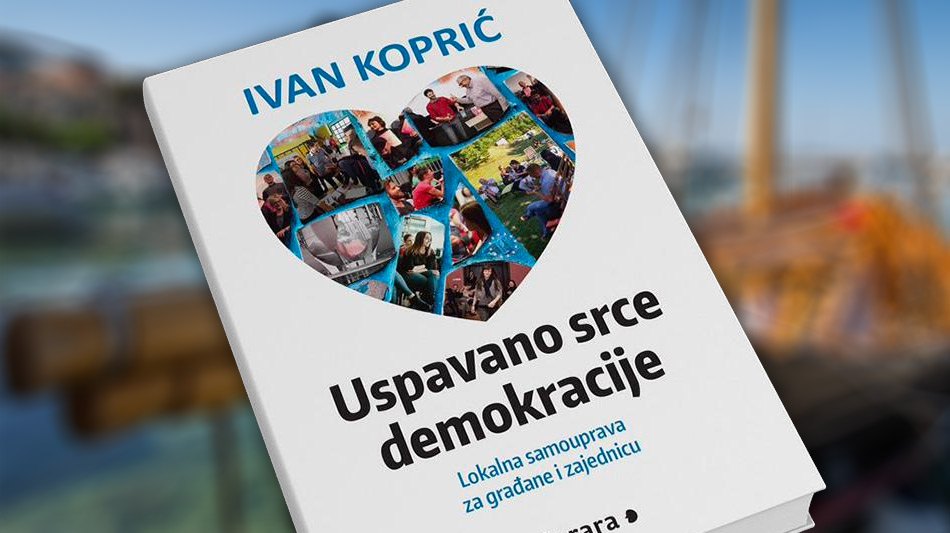 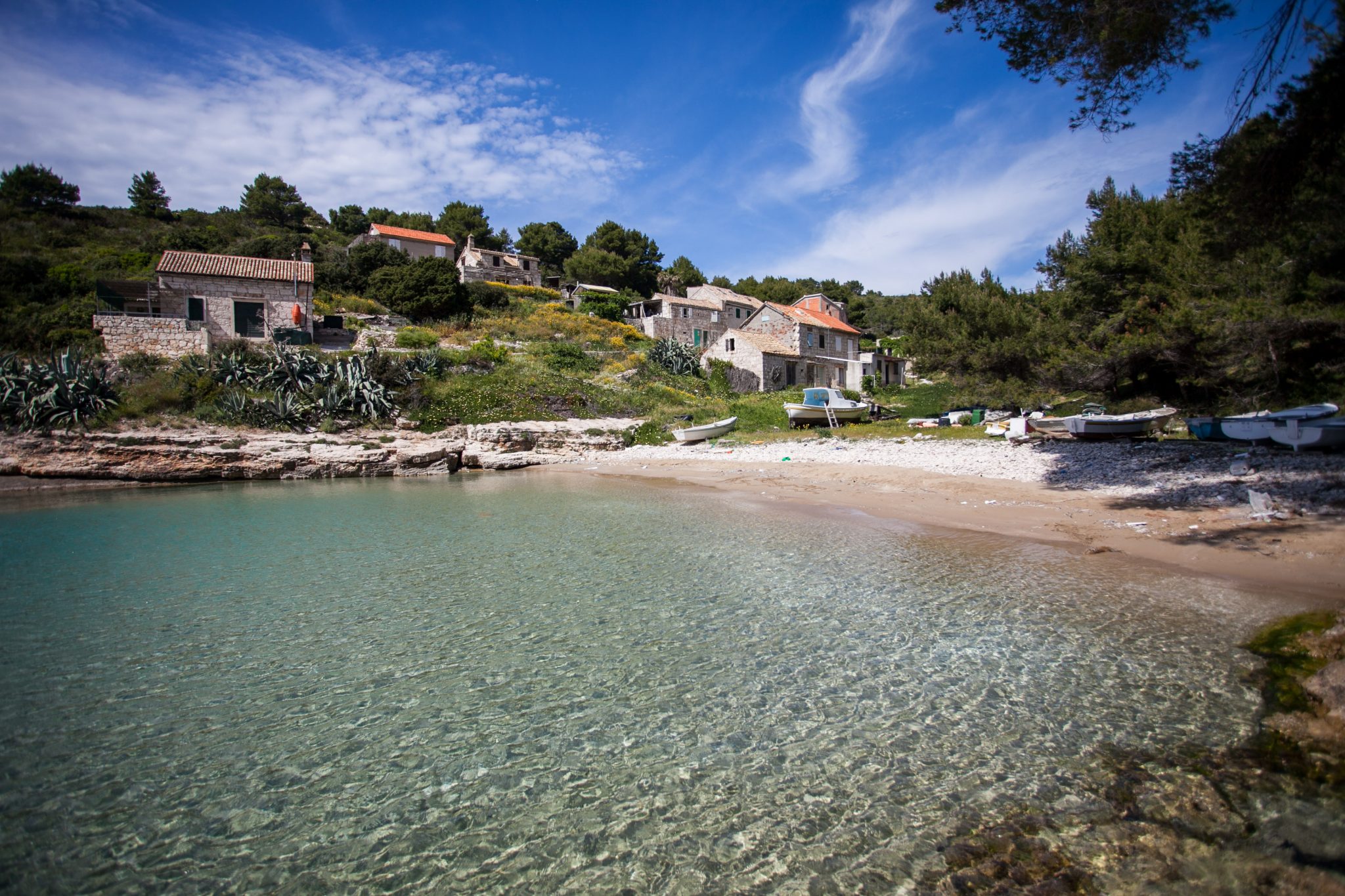 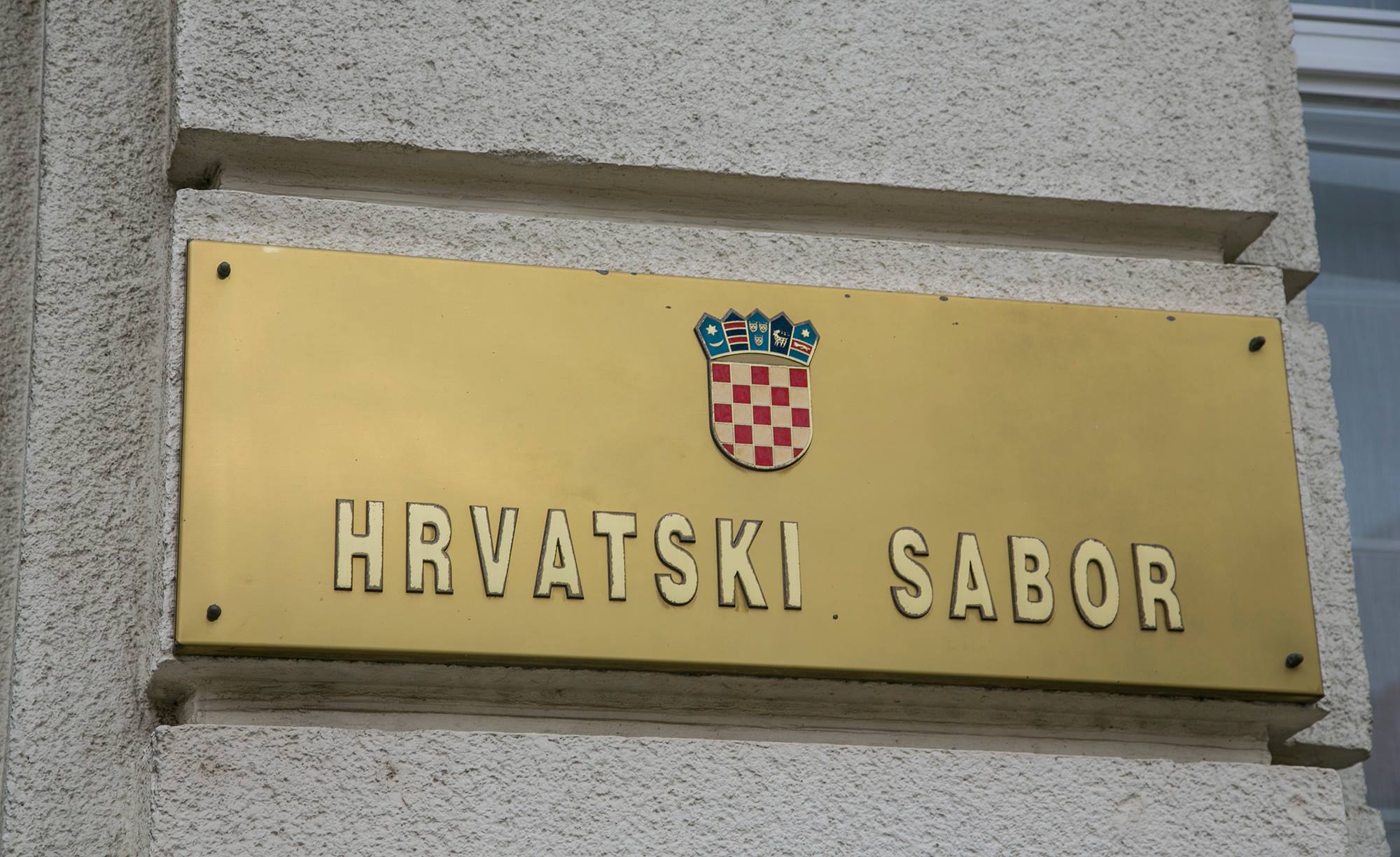 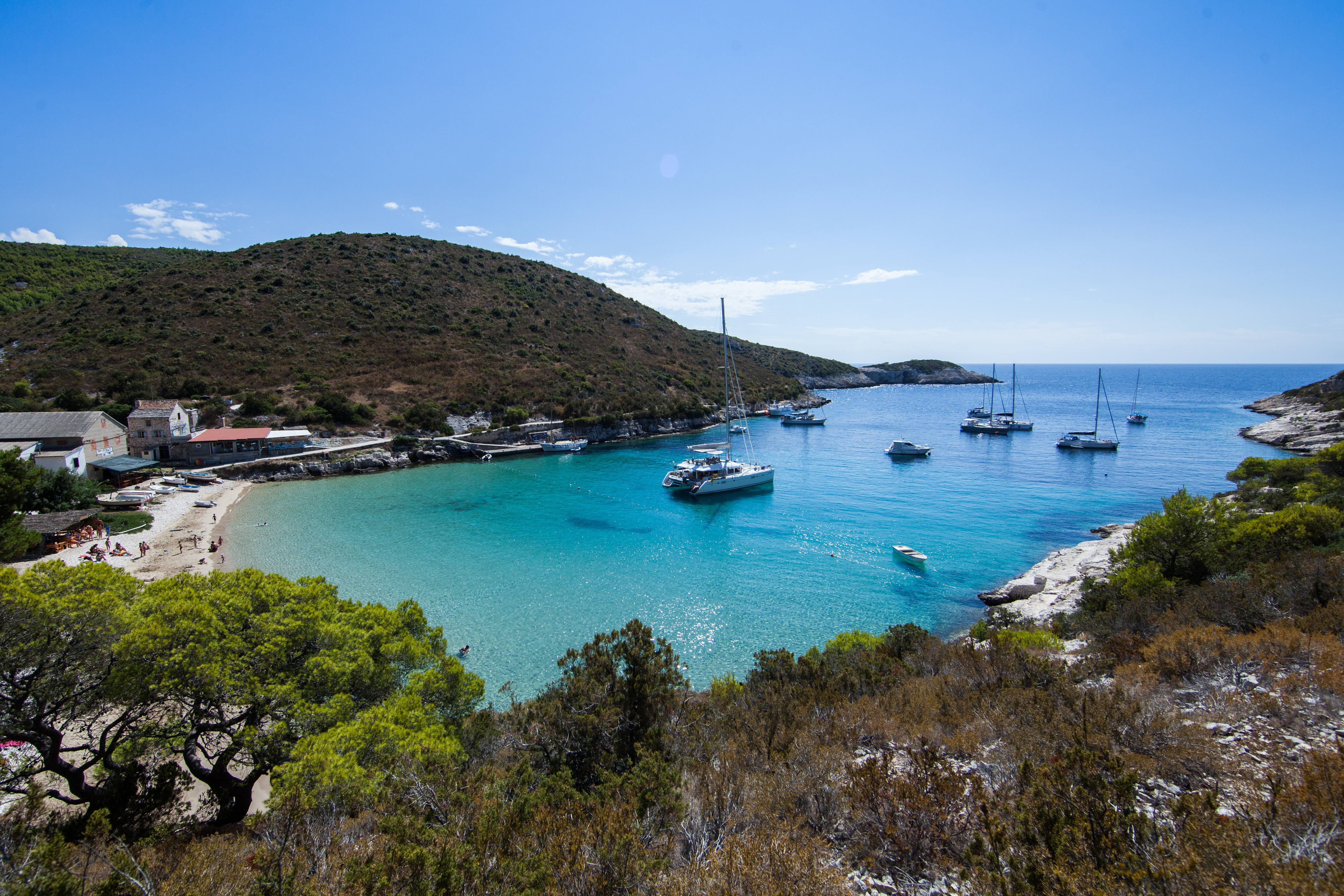 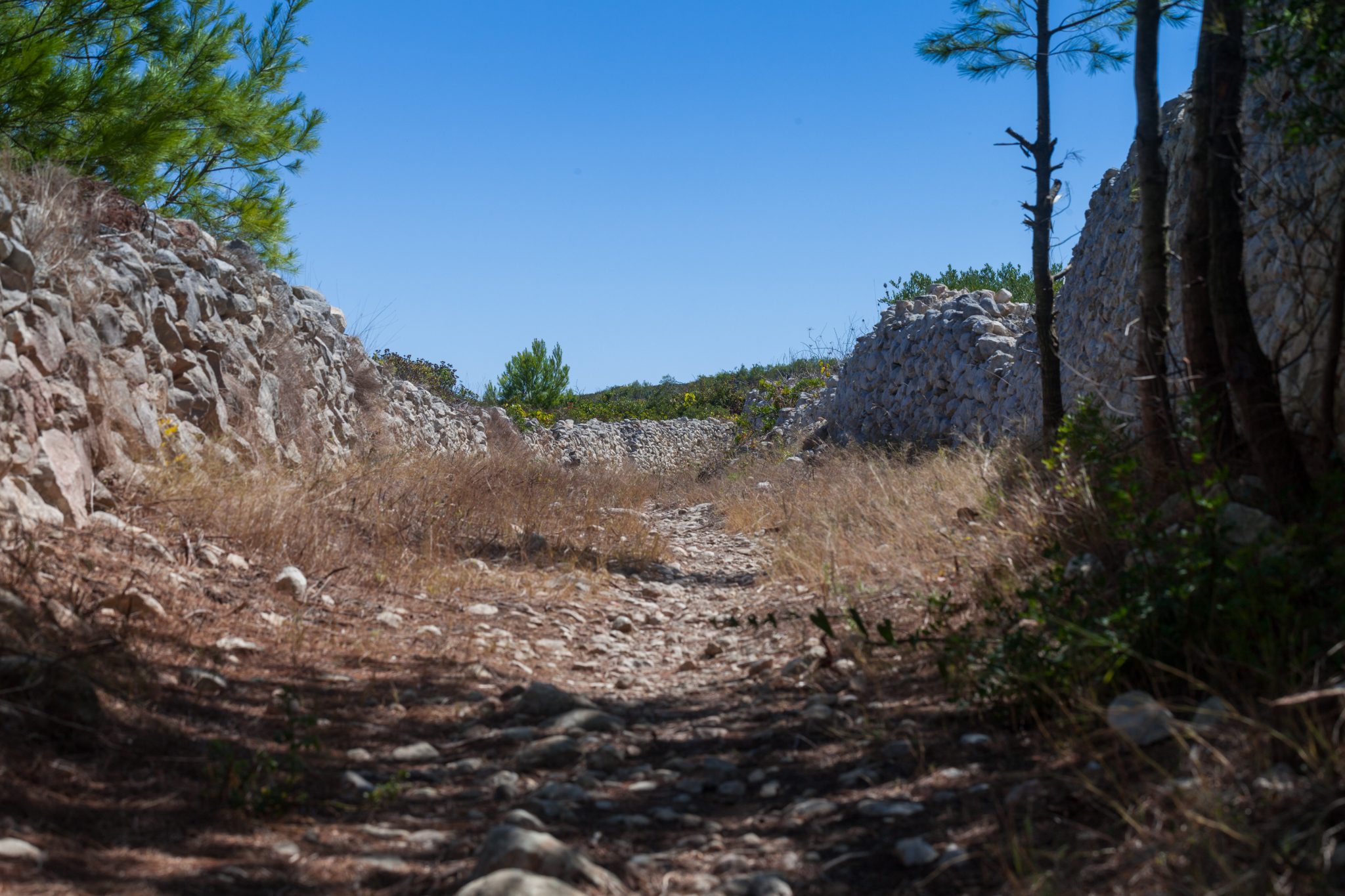 The Saving Bisevo Initiative is a non-governmental, non-profit, and apolitical association of inhabitants and islanders who are in love with the island as a reaction to the devastation of the Polje archaeological site, with the aim of preserving the cultural, historical and natural heritage and the sustainable development of this puckery pearl.

The objectives of the initiative are the appropriate valorisation of the comprehensive heritage of the island of Biševo and the management of the cultural and natural resources of the island through the implementation of a sustainable development strategy. As the Biševo landscape is one of the last examples of preserved medieval rural cultural landscape, we advocate for the comprehensive protection of the landscape landscape of the island, in accordance with the Strategy for the Conservation, Protection and Sustainable Economic Use of Cultural Heritage of the Republic of Croatia.

The historical cultural landscape of Biševo Island, created in the interrelationship of man and nature, is conditioned by the tourist accommodation and reflects the traditional spatial relations that illustrate the historical development of the local community. Also, given the enormous archaeological potential of Biš continuously inhabited since ancient times, the strategy for sustainable development of the island should, among other things, predict the management of the island's cultural and historical heritage by forming an archeological park on the site of the monastery and the church of St. Silvester.

Finally, the aim of the initiative is to inform the public about the sharp degradation of the cultural and natural assets of the island of Biševo following the breakdown of mass tourism. The archeological site of Poje, which was marked by the Benedictine church in the 11th century, has recently been devastated by illegal construction, while the development of unfinished local community projects is based on the theme of Modre Špilje, which is harshly exploited and whose monumental features are being questioned.

With this initiative, and in partnership with the Ministry of Cultural Heritage, we want to encourage (in the spirit of the Faro Convention) the balance between increasingly frequent public and private activities with the cultural and historical values ​​of the island, in order to achieve the sustainable use of its cultural and natural heritage.

* The Faro Convention promotes an innovative approach to heritage, which implies that the whole heritage issue should not only be addressed by experts and public administration but by all citizens and society as a whole.

Do you have a constructive suggestion, praise or criticism? Send us mail » 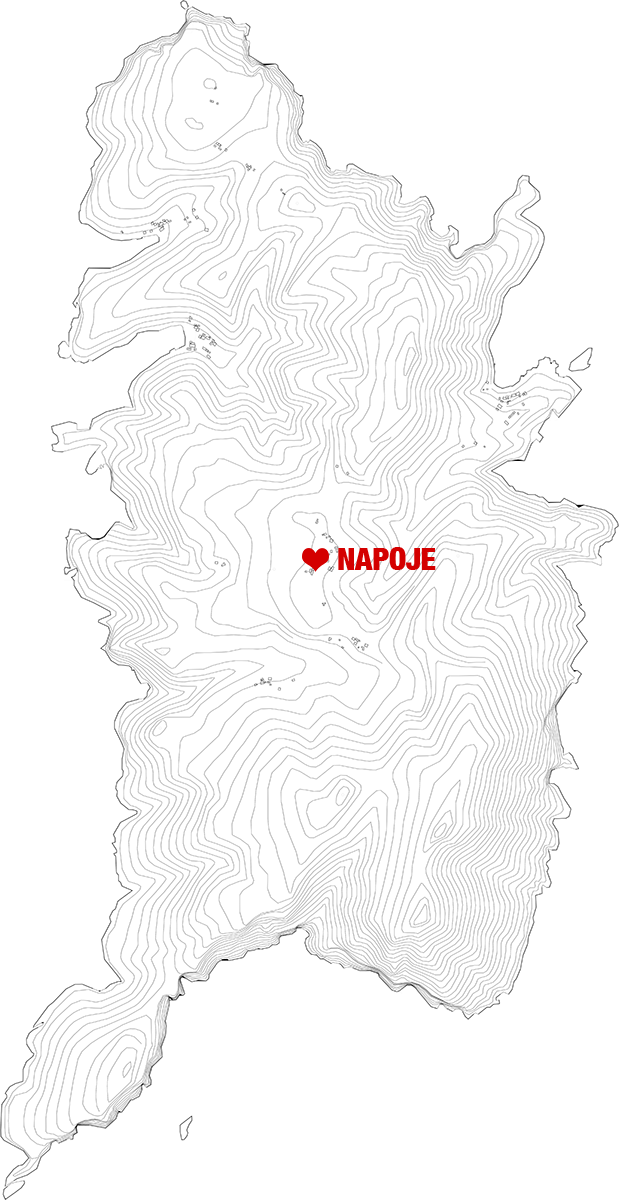 Iohannes Spalatensis, the monastery builder, has chosen the perfect geographical position of the island of Biševo, from which Christianity will spread to the eastern Adriatic coast. In the marvelous position of Biševska elevation, and on the ruins of an early Christian church, Ivan in the 11th century. it builds a new church around which the Poje village will later develop. But this is not the beginning of the settlement of this multilayer archaeological site. The oldest trace of human activity (if we skip the prehistory) is an antique villa rustica founded in the first centuries before Christ. The importance of this facility is perhaps best explained by the fact that it is one of two known rustic villas on our coast. The Romans could not bypass this fertile elevation, and they also intensively use the same location.

Over the remnants of the monastery, most probably during the baroque period, a small building complex of stone houses with a garden, which together with the church makes a very harmonious ambient-historical whole.

The island of Bisevo

Bisevo (italian: Busi) is an island in the Adriatic Sea, 5 km southwest of Vis; with Komiža it is connected by boat line throughout the year. Surface 5.91 km² with 11 inhabitants (2011). In 1961, there were 114 inhabitants (before World War II over 300) living in the Biševo area, living in eight small villages: Mezoporat, Vela Gora, Potok, Poje, Nevaja, Porat, Salbunara Gornja, Salbunara Donja. 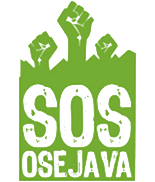 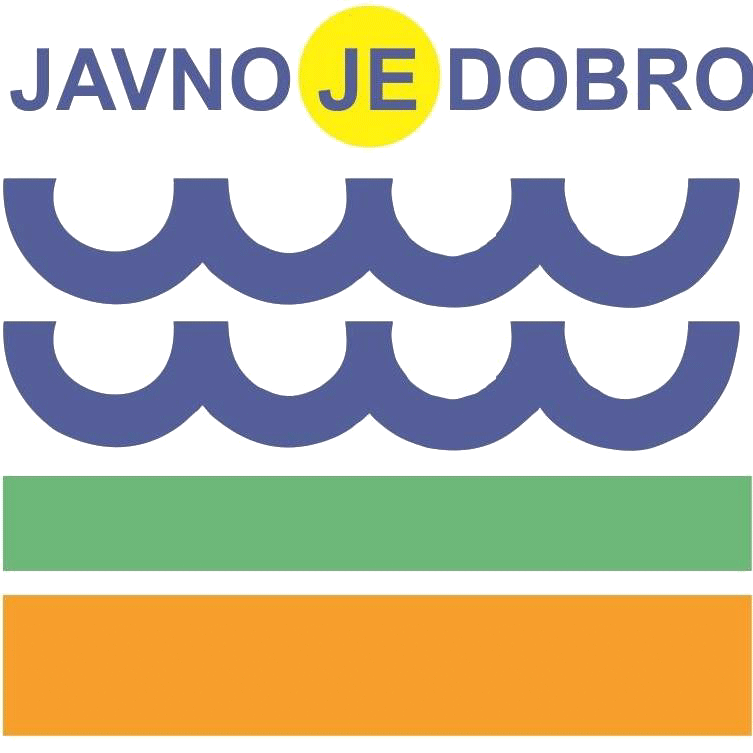